Eldercare » Contributors » Grandparents sharing interests with their grandchildren = amazing adventures!
Two of our grandchildren are now in their late twenties, but we still share many of the same interests and adventures that first brought us closer when when they were little kids. 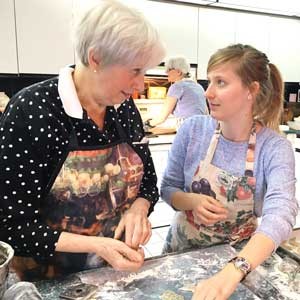 It started when they were toddlers and my wife and I discovered our calling: We were emphatically not their parents. We were grandparents – a relationship that was the gateway to a world that was different than the one their parents, being parents, could offer. My wife and I were the outliers, with a viewpoint that might be news to my grandkids.

In turn, they had fresh outlooks on things that we might have become jaded about. As grandparents, we had to learn what their sense of reality was.

It turned out that our older granddaughter and grandson were mentoring us as much as my wife and I were guiding them through life.

It started with a shared love of drawing

My wife started something when she was taking our own kids to the doctor. There was often time to kill in the waiting room. How to keep three kids from going bonkers? She invented a drawing game.

Now, there isn’t a kid who can resist pencil and paper. The game was as simple as can be: one person draws squiggle, the other person makes it into something.

Squiggles turned into pirates. Scribbles into airplanes. Random scratches into almost anything.

When the grandkids came along, we continued the game with them.

It was exciting to see them learn to see beyond the obvious, and my wife and I learned to keep reaching for something new.

The trick was to discover what was “in” the drawings our grandchildren made, maybe add a few lines, show them where the picture might go and invite them to add their more lines, you could see their imagination at work!

The key to making these grandparent and grandchildren adventures work was setting a clear ground rule for ourselves;he relationship was an adventure among equals. No parent-to-child communication.

“Sharing and interest” means more than just “being with” your grandchildren

It means taking the time to see if there is a common interest. Some times it will be immediate, sometimes it happens over time.

Where that common interest will take you – both you and your grandchildren is part of the excitement. In our case, the drawing game progressed to visits to the Art Gallery of Ontario, and later, a lot more.

One memorable Sunday, we went early and the kids were able to participate in the Gallery’s kids’ programs. I was able to sit with my grandson as he drew a plaster bust and help him with “how-to” information that I had learned at art school when I was a teenager.

This interest in things visual led to a shared interest in photography, probably my major hobby. So where does this go? Today, it involves back-and-forth emails about new equipment, admiration of the work of others, our own work, how-to tips, borrowed camera equipment and, in the case of my grandson, joint motor trips to car races and concours d’elegance. These combine our joint interest in picture-making and automobiles. They also give us a weekend over which to talk. 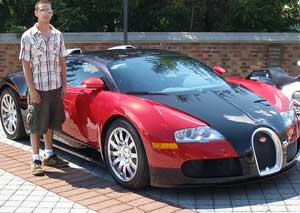 One grandson. One gorgeous Bugatti. Concours of America, 2008.

I remember a visit to Allan Gardens with our two younger grandchildren. It began with a shopping trip to buy art supplies, because we were going to draw flowers at Allan Gardens a large greenhouse in down-town Toronto. The grandkids chose their own drawing pads and pastels and off we went.

At Allan Gardens, we didn’t just walk through and say, “look at that flower!” We stopped at the flowers that captivated the kids, sat on the rock ledge and drew the flower. It transformed one of those, “This is good for you,” visits into a fun, interactive and memorable experience.

Those grandchildren also are adults now. One is in university and the other graduated from the University of Toronto with double majors in Computer Science and Film.

Doing something together is half the story. The rest is about talking and listening.

My wife had a brilliant idea when our older grandson turned 13 and had his Bar Mitzvah – the Jewish coming-of-age ceremony.

I was an active glider pilot at the time and she suggested that our gift could be flying lessons. Our daughter and her husband agreed.

Most summer Saturdays, my grandson and I travelled in my car to my glider club about and hour and a half out of Toronto. What did we do on the drive? We listened to radio drama on CBC. We tasted jazz on Jazz FM. Stuff you couldn’t just tell a teenager to do.

Also, we talked. If we happened to hear a newscast, we might get into politics.

At the airfield, I didn’t instruct him; others did. We joined each other for lunch, sometimes in nearby Arthur, sometimes at the field. On the way home, we always stopped for a coffee in Orangeville.

The adventures grandparents start when their grandchildren are toddlers can continue over time and distance.

Once you’ve built a solid connection with your grandchildren, you have a ticket to their progress through life, wherever it takes them. And as the kids grow, you’ll find that they want to share things they’ve learned and now know more about than you do.

Today, my older granddaughter is a product designer for the Walt Disney Company in Munich, Germany.

With emails and Skype, we trade insights about design and marketing and her travel photography. Not to mention my razzing her boyfriend because he’s a lawyer.

Her brother is the world-renowned developer of the award-winning mobile game Alto’s Adventure. He started in the tech industry with a small business-app developer in Markham. He became their marketing and PR guy. I mentored him from my life as an advertising creative director. And he kept me up-to-date about computers and related technology. This still goes on.

And when they’re back in town, there’s nothing better than getting together for the things they remember best. Like making Bubbie’s “moon” (poppy seed) cookies.

Take the time to be involved with your grandchildren and encourage shared experiences. You’ll be amazed at how rewarding it can be.