Eldercare » Eldercare Home Health News » Magic tricks – amaze your grandkids with these easy-to-learn tricks!
Fess up - magic tricks still have the power to amaze you. Now it’s time to blow the kids away with your magic tricks! 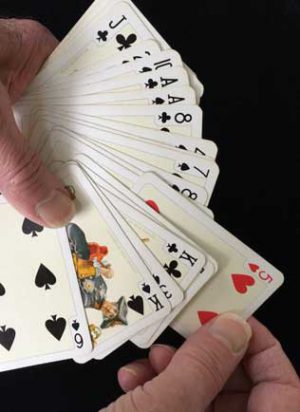 It hit me out of the blue the other day. There’s a whole bunch of magic tricks that are easy to learn, easy to pull off and that will leave grandkids (and their parents) goggle eyed.

Here, I’ve put together some links that include videos so you can learn them easily.

It’s a good idea to take things in stages, start with the tricks you think will be easier for you and as you get more confident and your dexterity improves you can work your way up to some of the more advanced (but still easy) tricks.

Start by putting your fingers in training.

Some of the tricks require a little sleight of hand with coins. You’ll may need to manipulate the coin quickly to get it to where it has to be. Don’t be surprised if you need a little practice to make these tricks work – it’s worth it, especially when you see your grand kid’s eyes light up!

Reveal one trick at a time.

You’ll probably be asked to repeat tricks “by popular demand”. That’s okay if it’s a repeatable trick like “mind-bending” a straightened paper clip.

But some tricks won’t lend themselves to repeat performances. One I can think of is pushing a coin into an empty but sealed plastic water bottle. Once the coin is in, you’ll want to put the bottle out of sight (because there’ll be a slit in its side).

You may find it fun to keep the grandkids guessing until the next time you’re together, with the promise that you’ll show them the trick again and how they can do it!

As a matter of fact, if you prep a banana for each kid (trick 1), you might want to pull it off without even announcing it as a trick. Just give a prepared, unpeeled banana to each grandchild and watch their reaction when they peel them. NOTE: best to peel them over a kitchen table or counter.

You won’t believe how believable this magic trick is until you see it in a mirror.

You can make a matchstick or a toothpick disappear and reappear over and again. It will baffle your audience every time. I found this trick in Seven Simple Magic Tricks. It worked in the mirror. And, it worked on my wife! 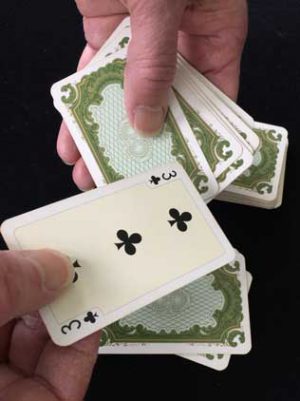 The power of four magic trick

Personally, I’d work on these for quite a while before I tried them on the grandkids. There are moving parts. But they will guarantee respect for your talent. Check out “The Power of Four.”

Want to drive the kids nuts?

Show them the Color Card trick. Ask one of them to pick a card and you find it every time. This needs a prepared deck, so it’s not easily repeatable. 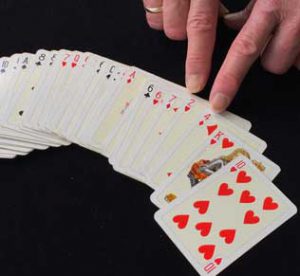 For simplicity, nothing beats a trick that isn’t really a trick. It’s all based on simple mathematical probability. Almost every time, you’ll be able to predict that any two cards (just the number or the Jack/Queen/King, not the suit, will magically appear beside each other – check out Method 3 in this video, it’s called “Making Card Predictions Easy.”

You’ll have hours of fun learning and performing these easy magic tricks.

This I guarantee. Your grandchildren never will forget the tricks you showed them and taught them. Not ever. So try a few today, and enjoy!