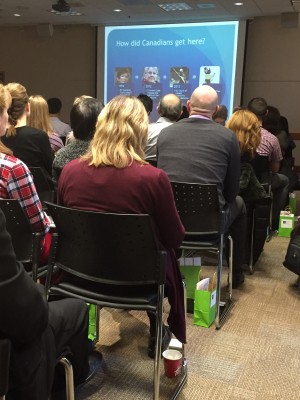 North York General Hospital rounds on physician assisted death. Some of the fortunate who found seats at this well attended session.

Dr. Leung clarified terminology around physician assisted death, gave an update as to where the legislation stands presently and addressed questions from the audience.

He reviewed the challenges that have been made over the years to the Charter of Rights in regard to the right to seek physician assisted death.

Last year the Supreme Court ruled that the law banning physician assisted death was unconstitutional and that Canadians with unbearable and irremediable suffering could be eligible to end their life with a doctor’s aid.

He listed the interim guidance that is in place currently. And the many undefined terms.

In order to be eligible for physician assisted death, an individual:

And the issues that the audience raised;

The guidance does not define the age at which one is considered an adult. Nor does it list which kinds of cognitive tests might be administered in order that a person might be defined as competent.

The guidance states that advance directives are not advised as acceptable direction from a competent adult.

This example was offered;

Some physicians may not, for a variety of reasons, be comfortable in the role of assisting death. There is a provision in the interim guidance for a physician to state a conscientious objection.

However there is also a duty to refer the patient to another provider.

In today’s paper we learned that a special Parliamentary committee will propose that Parliament adopt a new physician-assisted dying law that includes advance consent for people in early stages of dementia. The report is to be tabled in Parliament on Thursday.

There’s no doubt that many Canadians want access to medical assistance at the end of life; whether for palliative care or assisted death.

Canadians are not the first to consider adopting this concept. We can learn lessons from practitioners in other parts of the world where access to medical assistance at the end of life is more commonplace.

The complicated details surrounding the legislation of physician assisted death will not be close to sorted out by the target date of June 6, 2016. But there’s no doubt that the conversation has begun and in any gathering where the discussion takes place, it’s bound to be standing room only.