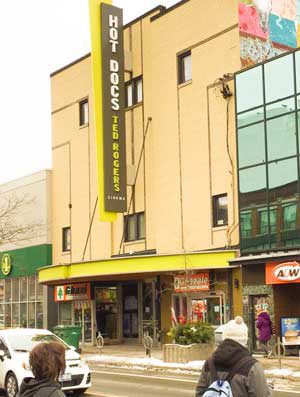 For the some of Canada's and the world's best documentaries visit the Rogers Hot Docs Theatre, Toronto

You may remember it as the Midtown Theatre, the Capri the Eden or the Bloor Cinema, but since 2016 it’s been known as the Hot Docs Ted Rogers Cinema.

Long a community cinema, the theatre now hosts some of Canada’s and the world’s best documentaries. There are also special documentary presentations, expert speakers and showcase series such as the popular Doc Soup screenings. There are even “meet the author” sessions for book lovers.

My wife and I saw a Thursday afternoon doc – a deeply moving story of two Holocaust survivor brothers and the mother, unknown to one of them. Well worth the price of admission.

The theatre has gone through a careful restoration after a lifetime of being used, torn apart and rebuilt. It’s not lavish, but certainly comfortable, and quietly hints of its origins. One caveat: it’s much easier to get to by subway than by car. Driving on Bloor West, with its bike lanes, is a hassle. If you are driving, there’s Green P parking off Lippincot, on the south side of Bloor on the first corner east of the theatre. You prepay, so be sure you estimate the right amount of time, based on the length of the film or event you are attending.

More on the history of the Hot Doc’s theatre

Not just Doc Soup, but a rich stew of hot docs – some of the best documentaries in the world

Be sure to scroll through the program on the Hot Docs website. You’ll find not just the docs to see, but the varied times that they show. They may be on in the morning in one series and the afternoon or evening in another. The choice of hot docs is breathtaking!

If you care about society and its social and political structure, there’s a hot doc for you featuring Noam Chomsky.

For those can’t resist a good travel film, “Italy: Love it or Leave” may be your cup of….

Mental issues are important to some doc viewers; they can join the conversation in a whole series dedicated to the Bell Let’s Talk program

The transcendent experience of music across time and genre includes post-film conversation with special guests in the Music on Film series.

On the other hand, if you like your music in an opera or ballet, there’s a series for you too.

Are there docs to see about rock, from Bob Dylan to Radiohead? You bet.

The point is, there are hot docs for every taste at the Hot Docs Ted Rogers Cinema.

The experience will range from sheer pleasure to serious learning.

Watching the docs to see is not like taking medicine. They may be good for you, but they really don’t taste bad. In fact, they can be startling, fun, weird, hilarious, relaxing, heartbreaking, deadly serious, inspiring and romantic – all while they add to your understanding of the world.

That’s the magic of documentaries. The apply all the stimulation of motion pictures to their core intent – to transmit information from the real world.

Seniors get a break – a $38 Bronze membership for seniors gets you discounts and more.

It’s easy to strike up conversations with like-minded doc-goers.

When you’re viewing some of the world’s best documentaries, seeing on your TV or online is just not the same experience (if they are even available). Seeing them at the Hot Docs Ted Rogers Cinema makes it special and brings you together with people who are invested in the subject matter, who have opinions and want to share them. There’s a good chance that someone will say, “Let’s grab a coffee and keep this discussion going.”