Eldercare » Contributors » What to do this weekend? Sample the refreshing world of craft beer in the GTA!
It’s a world of surprising flavours, genuine hospitality and some really good food. 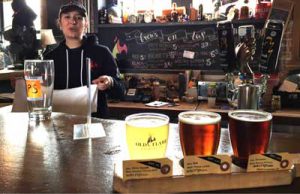 Old Flame Brewing Co., Port Perry - about an hour from Toronto. That’s a “flight” of beers in the photo - ideal for trying a few varieties of craft beer

So here’s the truth: I was searching for a blog theme and I thought, “How about craft breweries?” They’re popping up like mushrooms all over the GTA. Maybe they’d make a nice, ”what to do this weekend” change from the usual chain restaurant. So off I went. Well, what a lesson that was!

If you think of yourself as more of a wine than a beer drinker, the craft breweries will surprise you. Craft beers have as much subtlety and distinctiveness as wines.

Because I live in the suburbs, and I’m a senior, I’m not your typical metrosexual, hopping from downtown condo to bar to bar to bar. It’s the last thing I would do. So the growth of Ontario’s craft brewing industry really escaped me.

These micro breweries are the Mom and Pop stores for folks who do want to discover special kinds of beer. They’re generally “neighbourhood,” owned by a few people who turned their personal passion for beer and pride of craft into a very local business.

Some are really intimate, such as Rorschach Brewing Co. on Eastern Avenue, near the Beach. 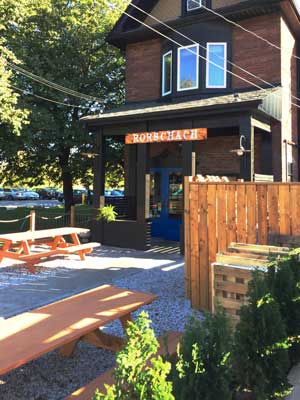 Rorshack Brewing near the beaches

The keywords above are, “near the Beach.” On the right day, you can work up a thirst walking the boardwalk and watching the giant bubble blowers and the kite surfers.
In amenable weather, the second-story terrace in those treetops is a wonderful place to enjoy a beer. 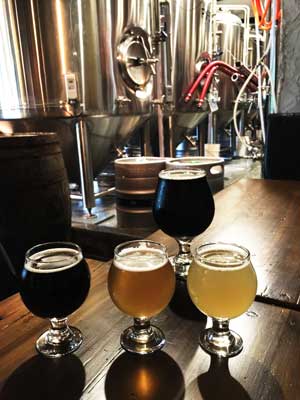 That dark beer in the large goblet in the photo above and the small one on the left is “Dark Adaptation.” a beer conditioned on a cherry puree and fresh-roasted coffee beans. Loved it! Tasted like the best espresso of my life!

Rorschach calls the beer in the centre Normopathy Pilsner. It’s clean and crisp. The bitterness is up front, with herbal, floral and earthy tones and a hint of citrus and spices.

I was really surprised by the beer on the right. It’s Rorschach’s Difference Threshold, an orange/ginger “saison” beer. It’s a zingy beer with the ginger and citrus noticeably there. I generally prefer the darker and creamier beers, but Difference Threshold was really, really refreshing and a great complement to food.

Those small goblets, by the way, are a great way to sample a few different beers without drinking more alcohol than you’d want.

Rorschach’s food menu, with hints of Asia, Tex-Mex and the Balkans, is genuinely tempting.

If you call Rorschach and set it up, the supposedly very shy brewmaster may be the one who gives you the tour.

Others craft breweries, such as the Amsterdam Brewhouse, on Queen’s Quay West, are as big and splashy as any theme restaurant. 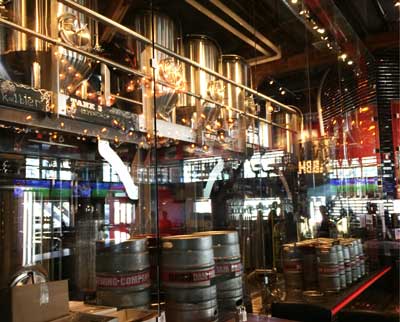 Still, Amsterdam is a local, independent craft beer maker, so you can call ahead and book a tour. 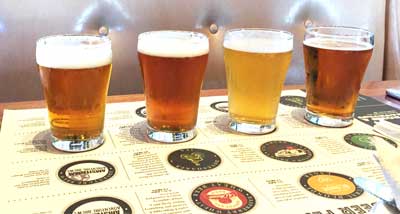 My Amsterdam flight was one of four convenient beer tours – the Front & Bathurst flight. The beer on the left is a small-batch brew. Beside it is Boneshaker – an unfiltered North American IPA (India Pale Ale). It’s citrusy and piney up front, balanced by a biscuit malt body. Second from the right, Cruiser – a golden pale ale with a big citrus punch. Big Wheel, the amber ale with a sweet maltiness a distinctive ground hop finish, was, as you’d expect, my favorite. 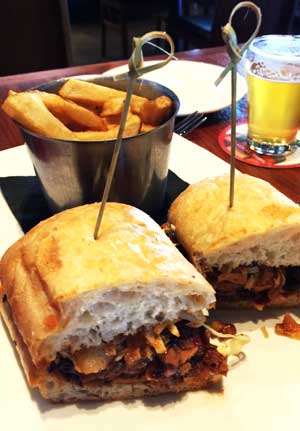 Amsterdam’s food menu is as extensive as you’d expect. Among our party of four, the smoked brisket sandwich and fish can chips went down very well. 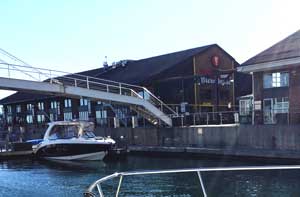 Again, a visit to Amsterdam Brewhouse is not just about the beer. There’s a neighborhood here – the marina, the crafts and other goods at Harbourfront Centre, the art galleries and the pleasure of a quayside stroll. 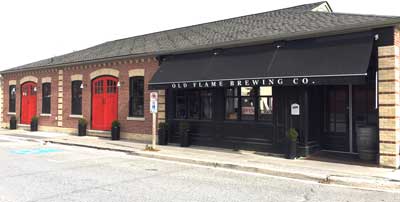 The Old Flame Brewing Co. is a block from Queen Street, one of the sweetest main streets near the GTA. The shopping’s pretty good for a guy and, I think, especially good for a woman. My wife has found stuff there that she’d never seen in the GTA.

The Old Flame Brewing Co. tasting room is a warm and welcome place. It serves bar snacks, but also invites its guests to bring in a pizza or sandwich from one of the local shops.

Old Flame specializes in German-style beers. Dirty Blonde, the unfiltered Kellerbier on the left, has a bready base with a note of lemon zest. The award-winning Vienna Lager brings the malt forward with caramel aromas and flavours. It appeals to both ale and lager drinkers. It takes seven different malts to create the rich and dark Munich Dunkel on the right. It’s my choice because of its slight bitterness. 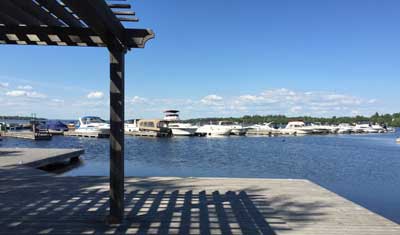 Lake Scugog is just a block down from Old Flame Brewing Co. It’s a charming waterfront. If the sun’s out, a short rest on one of the benches is pleasant even on an Autumn or Winter day.
Like most of the craft brewers, Old Flame puts its spent grains to good use once they’ve produced the “wort,” the liquid that makes the beer. 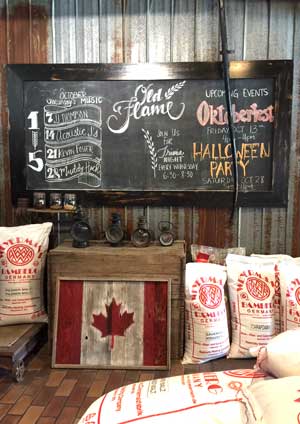 The owner of Old Flame told me that some of his spent grain feeds the sheep on a local farm. They, in turn, go into the lamb and lager pie one of the local butchers makes, using Old Flame’s beer. As I said earlier, “neighbourhood.”

I’ve just begun my craft beer adventures. Here are some more links to where to share the experience.

Craft brewers abound in the GTA. By searching these links, you may discover some close to home. And others worth the journey. Especially if you make the tasting room the reward for exploring a new neighbourhood.

You may also want to keep an eye on BlogTO, Toronto Life and the local newspapers and subway papers for the newest craft breweries that pop up.

Meanwhile, here’s to your health!